Epiroc AB (Sweden) is one of the leaders on the European drilling equipment and attachment market. 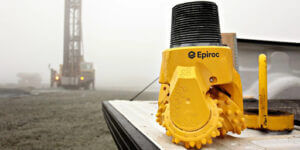 Brief history of the company:

In 1873, André Oscar Wallenberg and associates founded the company Atlas in Stockholm, Sweden, producing equipment for the Swedish railway network.

In 1905, the first rock drill was developed and presented.  It was followed soon by a lightweight, handheld rock drill, which was produced well into the 1930s.

In the following years the company worked to modernize and improve the equipment, which made them the leader on the attachment market in Europe.

In 1973, the first hydraulic rock drill was developed.

In 2004, Ingersoll-Rand Drilling Solutions, a manufacturer of large blasthole drill rigs, was acquired by Epiroc AB. The first almost noise-free drilling machine, which allows working round the clock in densely populated areas, was launched next year.

In this way the company entered the drilling machine manufacturing market and started progressing in that area. In parallel, the company actively worked to develop compressor equipment.

In 2018, Atlas Copco management decided to split the activity areas.

Since 2018 Actis Group has been the official sales representative of Epiroc on the Ukrainian heavy equipment attachment market.

Please, refer to the catalogue for detailed information about Epiroc attachment which you can buy in Ukraine.